I recently attended a meeting where we talked about the moments in life that have an impact on us (Lollipop moments). We talked about moments we experience that we may not have given much thought to but have a great impact on others. After attending this meeting and feeling inspired I began to reflect on some moments which make feel me proud of not only what I do but I see the pride my coworkers take in their work. Sometimes it’s easy to focus on the less positive but we have to make an effort to find the beauty and notice all these wonderful people in our lives.

I have been a Recreation Therapy Worker at Bonne Bay Health Centre for 7 years. Each day I see my coworkers going above and beyond, creating moments that are positively impacting others. They act like they are doing nothing out of the ordinary and for many it isn’t out of the ordinary, it’s just who they are. 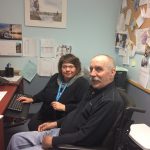 Living in a long term care home may be challenging for some of our residents. For Robert, one of the biggest challenges is loneliness. Unfortunately, Robert has limited family nearby to visit him. His only niece lives out of province and visits were limited to summer vacations. Robert and I discussed the idea of creating an email account so it was easier to send and also receive updated pictures and news from his family.

We decided to take this a step further and contacted several facilities to see if there was anyone else that would enjoy having an “email pal“ and an opportunity to form a new friendship. Luckily, Jeanette Hann, a Recreation Therapy worker at Calder Health Centre in Burgeo knew of someone who may be interested. Through Jeanette, we were able to connect Robert with a resident there named George. George began writing his emails to Robert the next day, his emails were filled with stories, pictures and jokes. George created a photo album so he could show Robert all the pictures.

Each morning Robert would want to check his email and see what beautiful picture or story was waiting for him. George’s email was filled with inspiration and gave Robert something to look forward to daily. Robert wasn’t the only one who benefited from this friendship, Robert was unable to use a keyboard but had no issues letting me know what he wanted to write, so my role soon became Robert’s typist. During their interactions I also gained a friend in George, it is a pleasure for both Robert and I to correspond with George.

Here is what George had to say about his new friendship:

“I have been a resident at the Calder Health Care Centre for approximately 15 months. 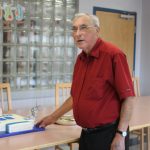 I am here because of physical disabilities. My mental capacity has not been diminished. Mentally, I am still just as active and alert as I have always been. I love writing little stories, especially about my boyhood memories, and telling jokes. However, it had no purpose other than for my satisfaction. Then one day it was as if God intervened. I was passed an email that inquired if there was a resident in another Long Term Facility that could communicate with a lonely resident in Long Term Care in another part of the province. Without hesitation, I accepted the challenge. I saw an opportunity to continue my ministry from a hospital room. I called it my “Compassionate Ministry.” As a result, I met Robert and his care giver, Beverly Payne. Although we have never met personally, a friendship has been formed. Each day I send Robert an email that may include pictures of wildlife, scenery, little personal stories or jokes. Daily I get feedback stating how these emails have uplifted Robert spiritually. However, this transaction hasn’t been one-sided. I have also benefited greatly from this as well and I am willing to continue as long as I have the mental capacity to do so.”

You never know how one thought or deed can impact the lives of others. Thank you George and Robert for allowing me to be a part of your moment!