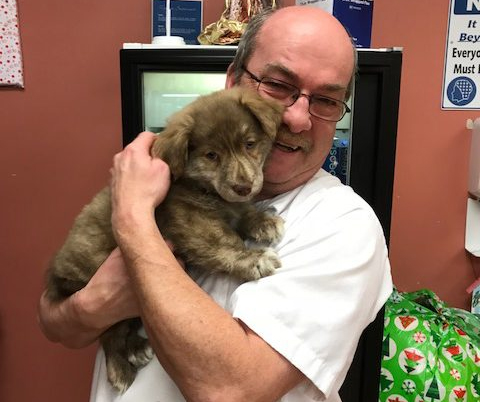 Phil Taylor, a cook at Corner Brook Long Term Care Home received a special surprise from his co-workers this past December. Phil had recently lost Buddy, his 17 year old dog and asked his co-workers if they knew of any dogs available for adoption. One of Phil’s co-workers suggested that they should surprise him with a new dog. Everyone thought it was a great idea and the entire kitchen staff began working together to formulate their plan.

Many people were happy to volunteer their time and money to bring the puppy and new owner together. They knew how much Buddy meant to Phil. They collected enough money among themselves to buy a large dog bed, puppy pads, puppy food and treats, toys, collar and leashes. An anonymous donor stepped in and provided a large bag of supplies, along with an offer to pay for the new dog’s veterinary costs.

One of the staff located a dog in Port aux Basques and drove out to pick him up. One day during their lunch break, they all presented Phil with a beautiful new pup named Beau. Beau is a husky terrier mix; a small, beige, friendly puppy with beautiful blue eyes. Phil was overwhelmed with the beautiful gift from his co-workers. He couldn’t believe that they would do this for him, and were able to make it happen without him knowing. He was overjoyed with the gift and how they worked together to support him in finding a new pet.

The Plato quote rang true in this case. Everyone was so happy for Phil. They said it felt good to do something special for someone. There were not too many dry eyes in the house. Phil is glad Beau is a part of his life and is hoping for many years of happiness together.

One thought on “Phil’s New Dog”