When we talk about stroke, we say “Time is Brain.” This story is an example of how an outcome was positive for an individual who had a stroke, because he received the right treatment within the recommended timeframe. 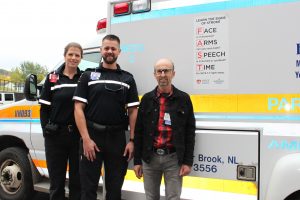 On July 18, 2018, “Joe”, a 52 year old male construction worker travelled to his jobsite 8 kilometers north of Cow Head intersection. After attending a safety meeting at 6:00 a.m., he proceeded to start his shift. Around 7:10, Joe’s coworkers found him slumped against his vehicle. He was unable to speak and unable to move his right arm and right leg. His coworkers immediately called for an ambulance. To try to get him to receive treatment quicker, Joe’s  coworkers decided to transport him to meet the ambulance in Cow Head. The Cow Head Emergency Medical Response (EMR) staff immediately determined that Joe was displaying stroke like symptoms. The EMR team placed Joe in the ambulance and called Tryco Ambulance Service out of Norris Point/Rocky Harbour at 7:32 for a paramedic intercept as per our protocol. The two ambulances intercepted each other near Sally’s Cove, approximately 20 kilometers north of Rocky Harbour. The paramedic team commenced assessment and treatment of Joe onboard the Cow Head ambulance and implemented the stroke bypass protocol, bypassing Bonne Bay Health Centre with Western Memorial Regional Hospital Emergency Department Stroke Centre identified as the appropriate destination. 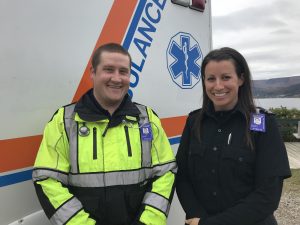 On arrival to WMRH Emergency Department Stroke Centre at 9:28, Joe was registered and assessed by facility staff while he remained on the ambulance stretcher. The staff confirmed Joe was unable to speak with right side arm/leg numbness/weakness and had right arm/leg drift (droop). Blood draw was completed by the lab staff and ambulance staff proceeded to transport Joe to Medical Imaging for CT scan (computerized tomography).

Joe’s CT was completed at 9:38 and he was returned to the Emergency Department Stroke Centre at 9:40 where the Neurologist was. The Neurologist and ED physician conducted assessment as per Code Stroke assessment protocol. The ED staff reviewed the CT report at 9:45 and it was normal. The decision was made to administer tPA (clog busting drug) which began at 9:59. Joe was then transferred to the ICU at 11:04.

On July 19, the day after, I checked on status of Joe at approximately 10:00 a.m. and learned he was sitting up in bed without any sign of speech or extremity deficits.  He stated that he “didn’t know why he needed to be in hospital.”

Code Stroke was implemented at Western Health in June 2018. With Code Stroke, the expectation is that you are treated with tPA within 30 minutes of arriving to a Stroke Centre. Stroke Centres are established at Emergency Departments at Western Memorial Regional Hospital and Sir Thomas Roddick Hospital because they have access to a CT scan, a neurologist and an ICU/stroke unit.